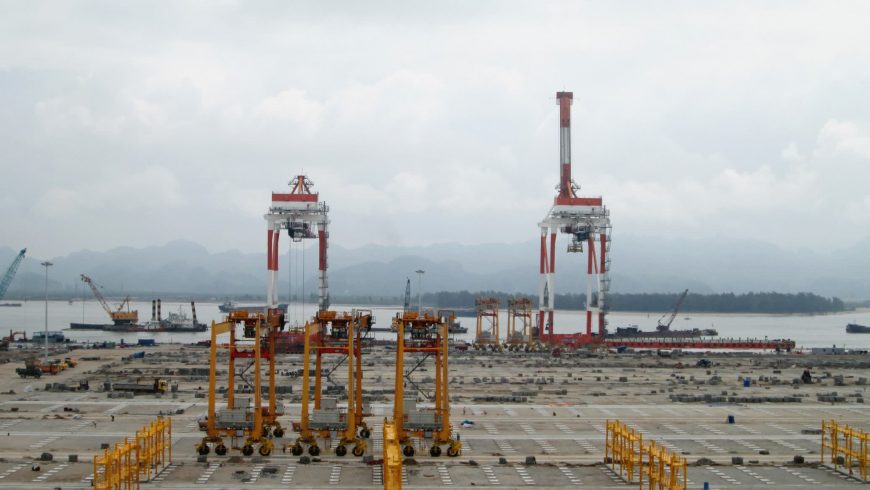 HANOI — Vietnam’s coastal city of Haiphong will open a deep-water port this month, taking a step toward becoming a key maritime link in the north and enhancing the country’s position in the global supply chain.

Haiphong is already known for its existing port. But the port is located on the River Cam, where the water runs seven meters deep at most, meaning the terminal cannot take large container ships.

The new Lach Huyen International Gateway Port, however, faces the sea, where the water is 14 meters deep. The wharf also doubles that of Haiphong Port at 750 meters long. The facility will house two container cranes as well.

Construction started on Lach Huyen port in 2013, with estimated costs topping $1 billion. When the first phase is completed on May 13, the port will handle around 300,000 20-foot equivalent units, or TEUs. That number will rise to between 2 million TEUs and 3 million TEUs in 2019 as capacity develops.

Combined with the existing port’s load, Haiphong will be capable of processing approximately 5 million TEUs. That would put it on a par with Ho Chi Minh City’s port in the south, which handled 5.94 million TEUs last year. Haiphong’s shipping capacity still pales in comparison with Singapore Port, the largest in Southeast Asia at 33.66 million TEUs. But the city will close in on the likes of Thailand’s Laem Chabang port, which manages 7.78 million TEUs.

Other infrastructure projects are complementing Haiphong’s port project. A new expressway connecting the port city with the capital Hanoi cuts travel time in half to roughly 90 minutes. Another highway to Quang Ninh province in northeastern Vietnam, home to factories owned by Japanese companies, will open this year.

Northern Vietnam is steadily becoming a production hub for the electronics, automotive and precision machinery sectors. South Korea’s Samsung Electronics, for one, has established mobile phone plants in that region. The Deep C industrial zone near Lach Huyen has already attracted roughly 80 companies from both at home and abroad.

“Considering the aspects of importing material and exporting products, a large port affords a huge advantage,” said a source from IHI, the Japanese engineering group that has invested in the industrial zone.

Elsewhere in the north, Vietnam’s second oil refinery will begin operations on May 13, the same start date as Lach Huyen. Shareholders in the Nghi Son complex in Thanh Hoa Province include Idemitsu Kosan and Mitsui Chemicals of Japan, as well as Kuwait Petroleum International. With the daily output pegged at 200,000 barrels, the refinery will make Vietnam capable of supplying 70% of its fuel demands, up from 30%.

Many northern Vietnamese exports that end up in North America and Europe currently go through Singapore or Hong Kong. But Mitsui O.S.K. Lines plans to open a direct shipping lane from Lach Huyen to North America. The Japanese marine transporter expects the export business to grow under the Trans-Pacific Partnership and other free trade agreements.

Many companies are locating facilities around the Lach Huyen port. Vingroup, Vietnam’s biggest real estate conglomerate, is building an automotive plant in a nearby economic zone. The group plans to sell 100,000 to 200,000 vehicles next year, and exports to other Southeast Asian nations are also on the table.

The emergence of major port cities in both northern and southern Vietnam is likely to affect the logistics industry throughout mainland Southeast Asia. The East-West Economic Corridor, based on a 1,500km road connection across Vietnam, Laos, Thailand and Myanmar, is now in operation save for some parts of Myanmar. Cross-border land travel in the area has never been easier.

The Association of Southeast Asian Nations has done away with virtually all tariffs among members, and the economic community is looking to improve customs clearance. The East-West Economic Corridor could provide a path for Vietnam to export goods to Laos, eastern Thailand and other places.

But Vietnam faces some challenges to fully leveraging its port infrastructure. While Singapore and other ASEAN nations are streamlining paperwork, a large part of Vietnam’s bureaucratic regime remains notoriously inefficient. Certain policies implemented by the Vietnam’s one-party state, such as nontariff barriers on vehicle imports, are also cause for concern.